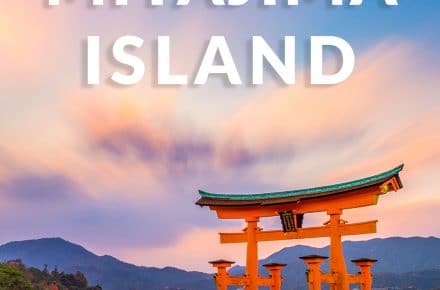 As one of Japan’s top sites, a day trip to Miyajima Island to see the famous floating Itsukushima Torii Gate is a must while in Japan. 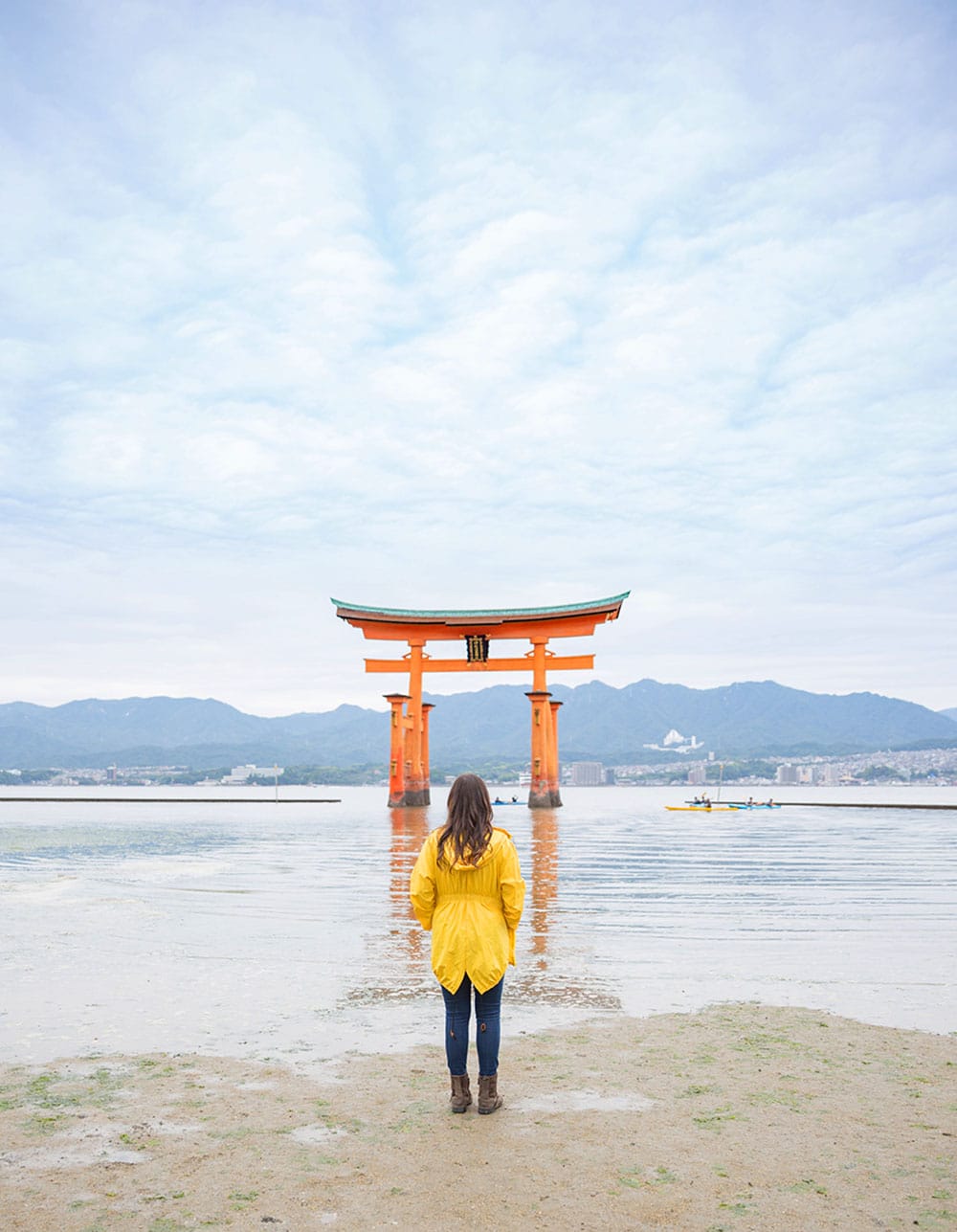 One of my very favorite stops in Japan was to Miyajima Island, home of the famous floating Torii of Itsukushima Shrine.

I have seen pictures of this infamous floating torii gate, often referred to as the Itsukushima Shrine, but actually never really knew where it was, other than Japan. Lucky for me, I have a good friend who lives in Japan, quite close to this island, who arranged for us to take a day trip. I’m so glad because I never would have found it on my own! 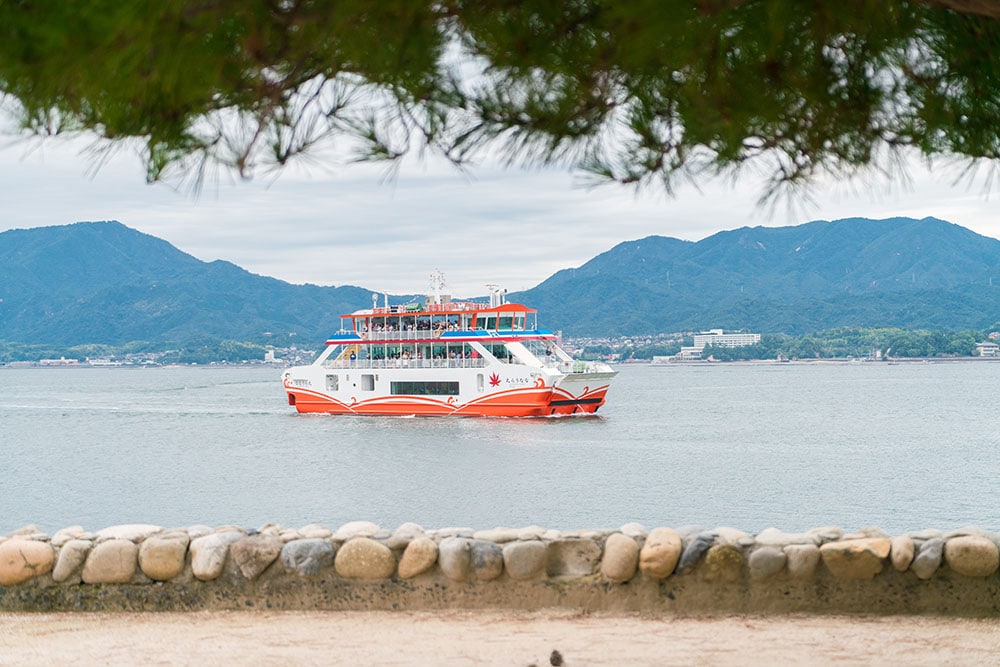 Planning a Trip to Japan?

If you’re planning a trip to Japan, let me do the work for you. This 2 week Japan Itinerary is a detailed step-by-step guide for how to visit this amazing country.

Where is Miyajima Island and How do You Get There?

Miyajima Island is located in the south of Japan, tucked inside Hiroshima Bay. The island was surprisingly easy to get to. I highly recommend purchasing a Japan Rail Pass before going to Japan. Learn more about what the Japan Rail Pass is, how to get it, and how to use it in my article here.

After spending several fun-filled days in Tokyo, we took the Shinkansen (Bullet Train) to Hiroshima using our Japan Rail Passes. We spent several days in Hiroshima with a day trip to Miyajima Island. From Hiroshima, we took the streetcar to the Miyajima Ferry Terminal. There are two options for the ferry, be sure to choose the one that accepts the Japan Rail Pass. It was a quick and beautiful 10-minute ferry ride to the island, where we exited and were greeted by the island’s many deer.

READ NEXT:
Best Hotels in Florence

If you’re interested in taking a day tour to Miyajima Japan or having a cultural experience on the island, here are some recommended tours that would be great to do.

What to do on Miyajima Island

Miyajima, literally meaning Shrine Island, got its name from the famous Itsukushima Shrine. The island was once entered by boat through the floating Torii gate which would lead you directly to the shrine, a place of a great spiritual importance in Japanese history and culture. The island is believed to have been inhabited since 593.

The Most popular attraction on Miyajima Island is, of course, the floating Torii. A Torii is a Japanese gate between the normal every-day world and a sacred place, in this instance the Itsukushima Shrine.

Although this Torii gate is sure pretty to look at, it does serve a purpose. The orange color of the gate is believed to keep evil spirits away, and this is why you will see it on many other toriis and temples around Japan. To be respectful, please enter through the Torii before going into the Itsukushima Shrine.

This giant Torii gate is the icon of Miyajima Island. The current one we see today was erected in 1875 and has survived many earthquakes and typhoons. The original Torii was built in 1168 but has been rebuilt eight different times. The floating Torii gate actually stands under its own weight of 60 tonnes that keep it balanced and standing on the ocean floor. Pretty impressive for nearly 200 years!

If you stay on Miyajima Island all day (and you should), you should be able to see the Torii at low tide, when you can walk out to the gate, and also at high tide, when it appears to be floating mystically on the water. If you want to hit the floating Torii gate at just the right times, you can check the tides here. There will be a million other tourists taking pictures in front of the gate, but you’ve gotta do it. If you get lucky, you’ll have a deer in your shot!

READ NEXT:
What to do in Yellowstone National Park with Kids 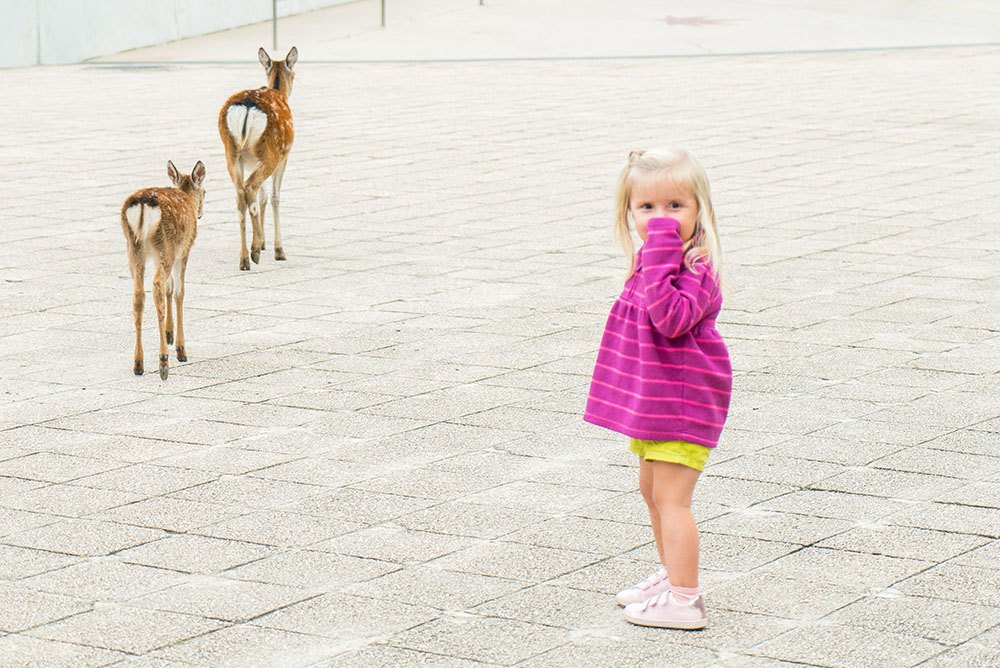 Speaking of deer, Miyajima Island is full of friendly deer who will want to eat whatever you’re eating, and maybe even eat what you’re wearing. These sika deer are considered sacred messengers from the gods. Please do not feed them, especially human food. I rescued a few deer who were eating plastic wrapping. Trashcans are hard to come by in Japan, so always bring a little baggie for your own garbage. 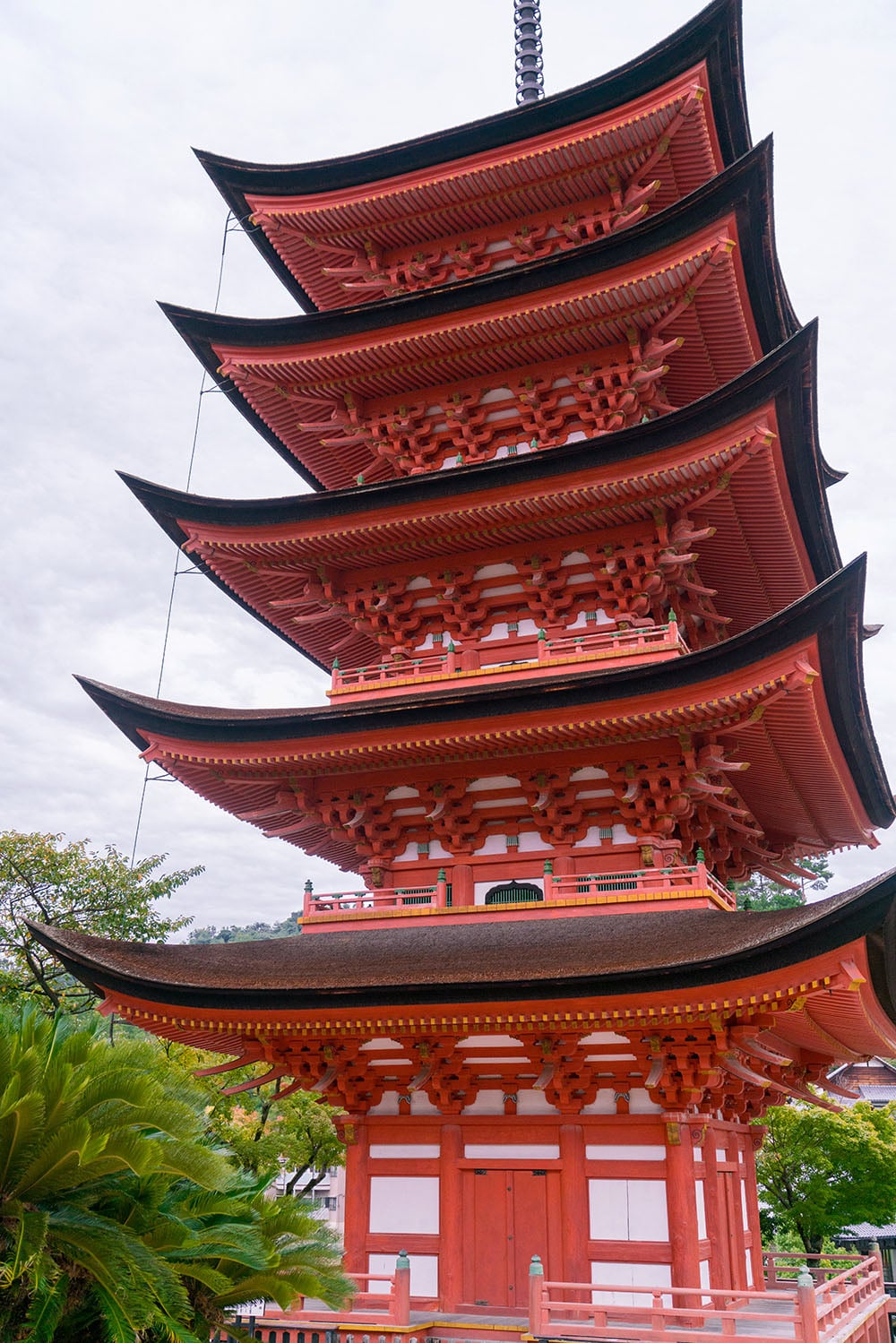 Visit the Many Temples, Pagodas, and Shrines on Miyajima Island

Since Miyajima literally means shrine island, you can bet there are a few here. These are some of the most beautiful and spiritually meaningful shrines and temples: 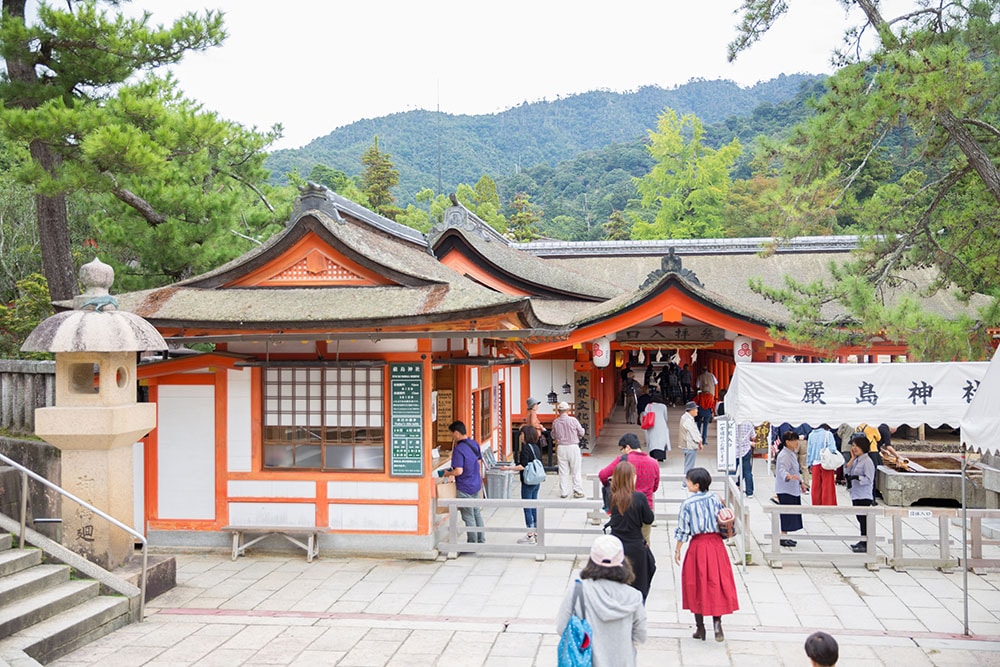 Head to the Top of Mount Misen

There are two ways to get to the top of Mount Misen. You can ride the Ropeway Gondola up Mount Misen where you’ll be rewarded with forest and ocean views, or take a hike up the mountain. Either option is breathtaking. The Ropeway will cost around 1800 Yen roundtrip. 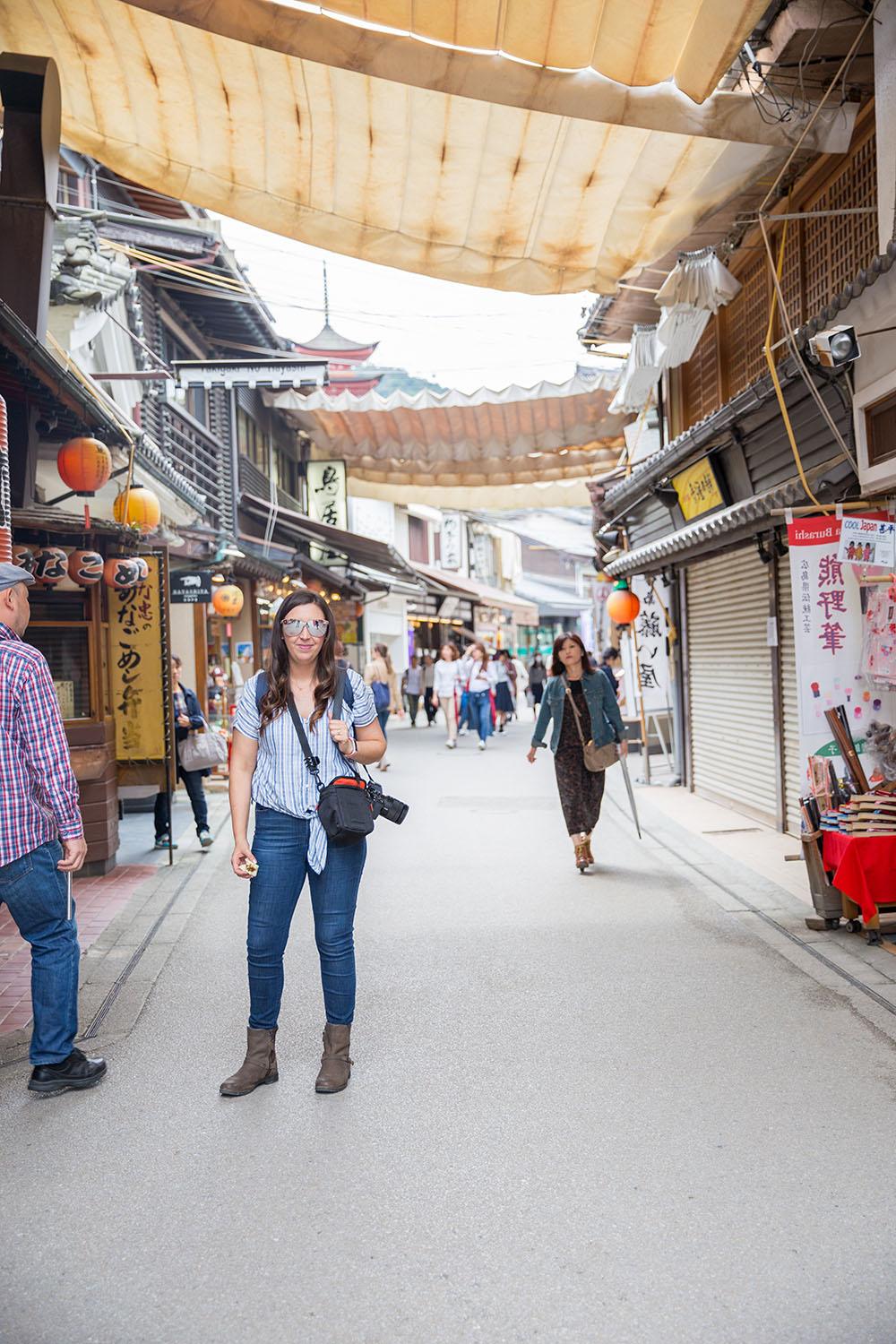 This is the main shopping street on Miyajima Island where you can find anything from kitschy souvenirs to delicious meals. Spend some time wandering the streets and trying out snacks from different vendors. For a complete list of foods that you MUST try in Japan, see my article here.

These were my favorite treats in Miyajima

Whatever you do on Miyajima Island you’ll have a great time just soaking up the atmosphere and enjoying the beautiful scenery.