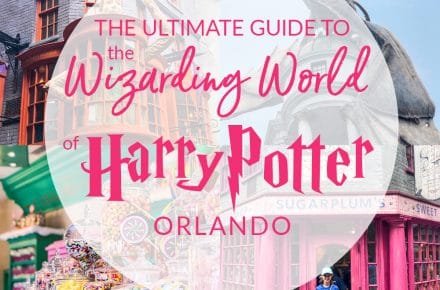 Thank you Expedia for sponsoring this post. Book your travel on Expedia.com to save with the Add-On Advantage!

If you’re visiting Universal Studios Orlando, be sure to read this ultimate guide to visiting the Wizarding World of Harry Potter. Unlock the secrets and find out how to save money on your stay and get the most out of your time in this magical place. 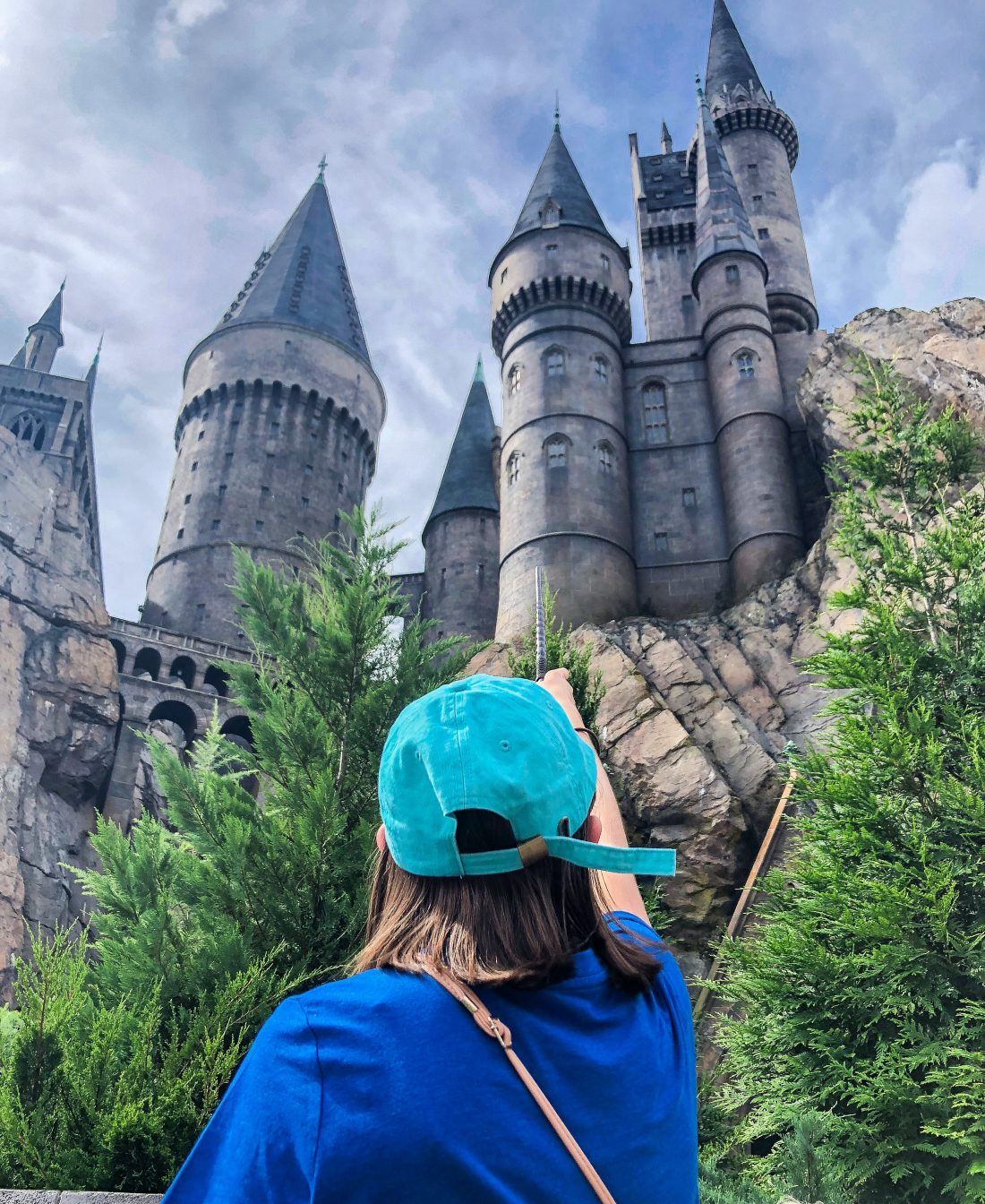 For Abbi’s 12th birthday this year, I knew I wanted to do something epic. She loves birthdays and I am not a great party planner or a fantastic celebrator of holidays. They just take SO much effort and money. I knew that I’d have to budget and plan well for this trip.

Abbi has loved Harry Potter since she was little. During our first trip to Europe, we spent hours driving through Europe listening to all the Harry Potter Books in the car. Then we would watch the movies, and when she got a little older she read the books on her own. Needless to say, we are all kind of huge nerds about Harry Potter.

She has wanted to visit the Wizarding World of Harry Potter for a long time. So I secretly planned a trip just for her and me! And Harry Potter World turned out to be everything we hoped for and more! Here’s is everything I wish I’d known before going.

Where is Harry Potter World?

There are actually two! One in California and one in Orlando, Florida, not far from Disney World.  We visited the Wizarding World of Harry Potter Orlando. This is the original Harry Potter land, and also the biggest. Learn more about what to do in Orlando with teens.

I bought my flights through Expedia, one of the world’s leading full-service online travel brands.  Their flight search engine was fast and efficient and I was able to find great flights from Washington DC to Orlando. I waited to book our hotels, knowing that the Expedia Add-On Advantage would be coming to me in a few days! 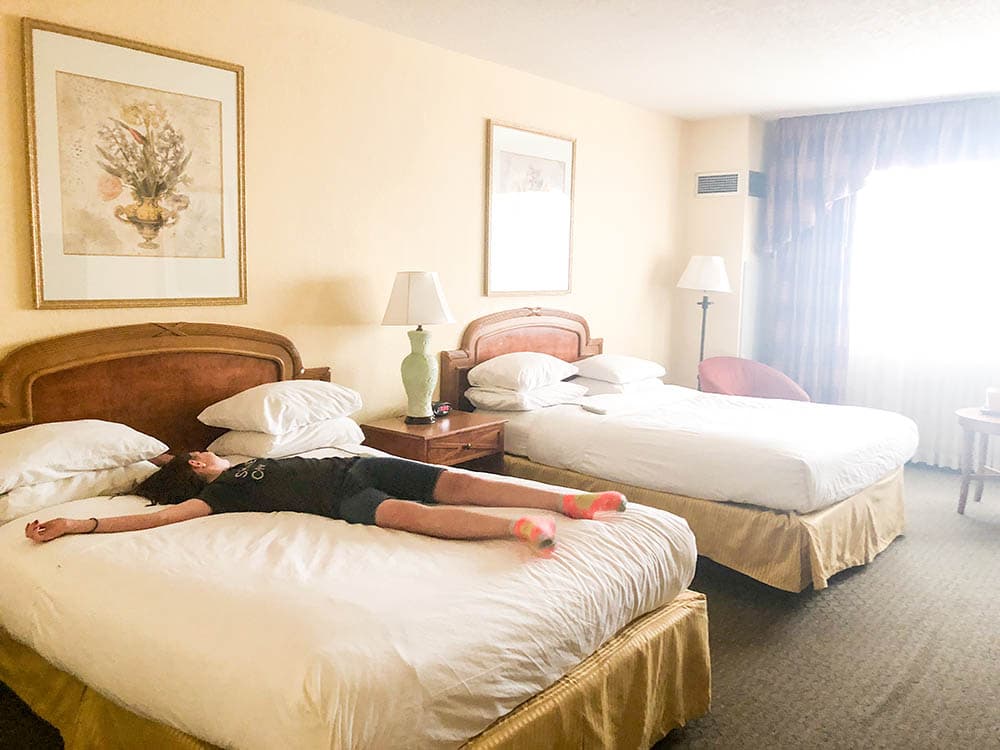 The Expedia Add-On Advantage is a program that offers hotel savings on select properties that are instantly unlocked up until the start of your trip. They will be sent to your email several days after you purchase a flight or package, or book a rental car.

The hotels they sent for us were killer deals! We booked a room at the Allure resort, less than a mile from Universal Studios, for only $44/night! The hotel stay needs to occur within the travel dates of the flight, car or package purchase, but the Add-On Advantage deals are always amazing.

I love the Add-On Advantage because it takes the pressure off of having to pay for the entire trip at once. I booked my flights, then booked the hotel the following week using the Expedia Add-On Advantage.

Honestly, if you plan on just doing the parks in Orlando, I don’t recommend renting a car. A Taxi, UBER or Lyft ride from the airport will cost about $25 as well as the ride back. Most hotels have free shuttles to the parks and if you are staying close to the parks a ride there will cost about $7 each way. By the time you pay for a rental car plus parking, it ends up being more cost effective to not rent a car.

If you do rent a car, be sure the check the Expedia Add-On Advantage for awesome deals on rental cars.

We did rent a car for one day that we weren’t doing the parks to go to Daytona Beach and take a dip in the ocean. The beach is about an hour away by car and the warm water and white sand is totally worth the drive. 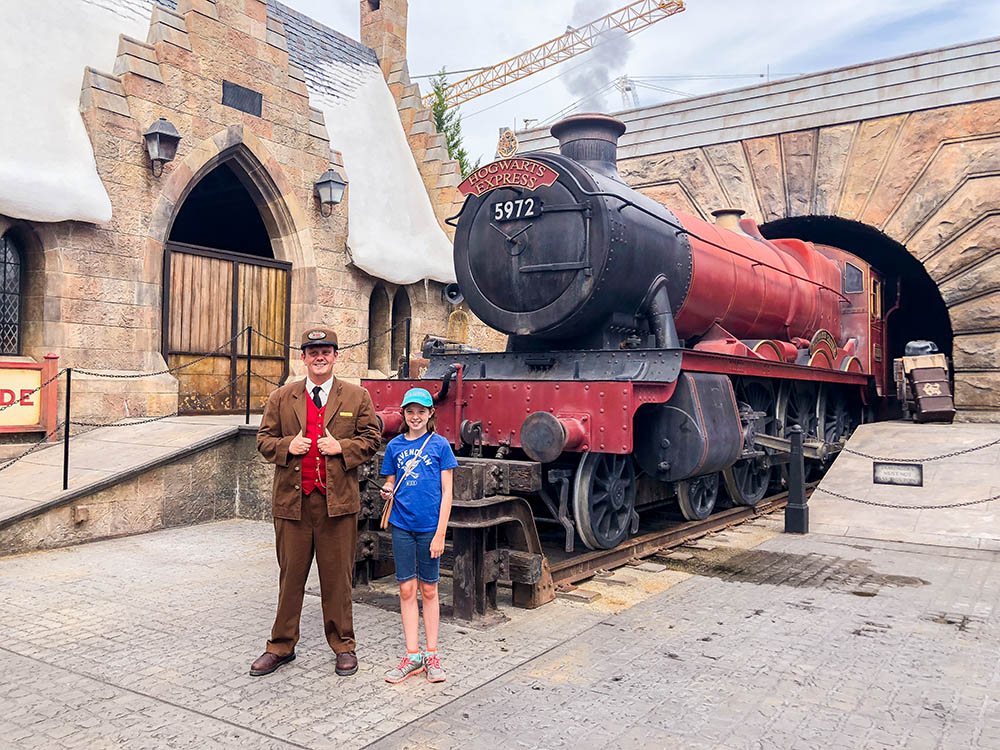 Tips for the Wizarding World of Harry Potter

As this was my first visit, I want to share all my Wizarding World of Harry Potter tips that I wish I’d known before we went. I don’t recommend just showing up without knowing anything. These tips will save you money and help you make the most of your time.

READ NEXT:
The 15 Best Things to do in Maui

The two halves of the Wizarding World are divided between Hogsmeade in Islands of Adventure and Diagon Alley in Universal Studios and are connected by the Hogwarts Express, which is not only a shortcut between parks, but a ride in itself.

If you are coming solely to spend time in the Wizarding World of Harry Potter, I suggest buying a one-day park hopper ticket, as both sections of the world can easily be thoroughly explored in one day.

Buying Tickets to the Wizarding World of Harry Potter

We like to buy our theme park tickets with Getaway Today. They are a trusted company and have the best deals out there. You can also book your Universal tickets and hotel together in a vacation package, which can save you a lot of money. You can purchase Universal packages here and Universal tickets here. 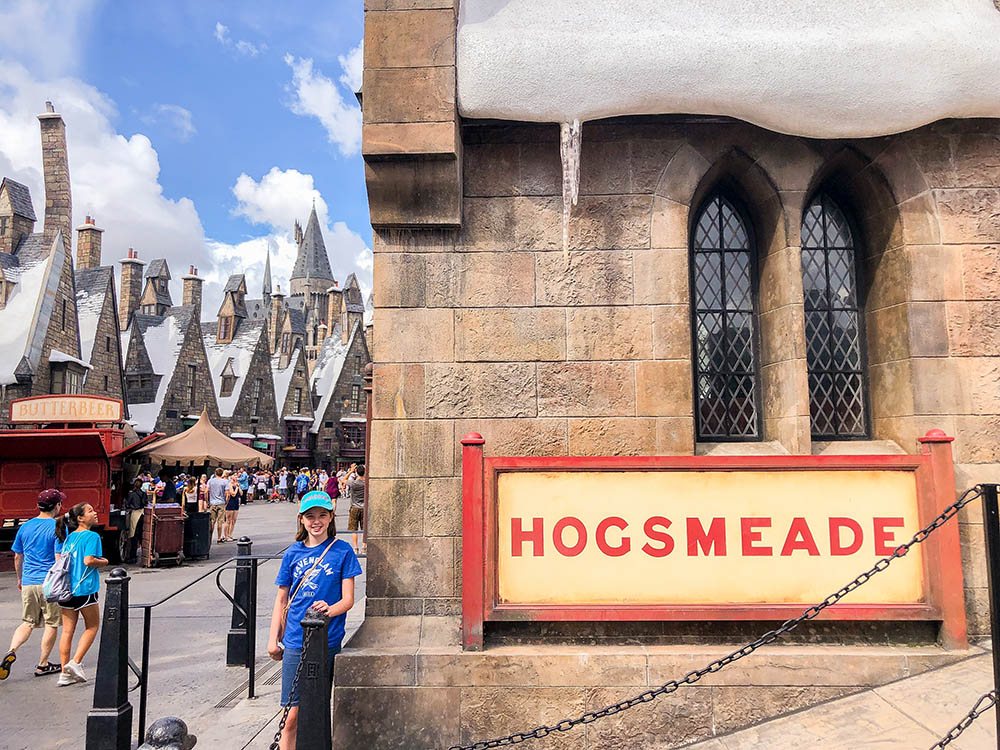 I recommend starting and ending your day in Hogsmeade. If you have early access because you are staying in a Universal property, this will only allow you early access to Universal Studios. Sure the half-hour extra is great, but what I’ve found is that it’s more crowded by the time the park opens. Sure, it’s great for those first 30 minutes, but so is Islands of Adventure. So ESPECIALLY if you don’t have early access, head to Hogsmeade in Islands of Adventure first thing!

The park opens at 9 AM, but they let us in around 8:30. The fastest route to Harry Potter is to go to the right once you enter the park and take a sharp left when you hit Seuss Landing.

Islands of Adventure is home to Hogsmeade where you’ll find the quaint town with snow-covered pitched roofs, Hogwarts Castle and lots and lots of butterbeer! 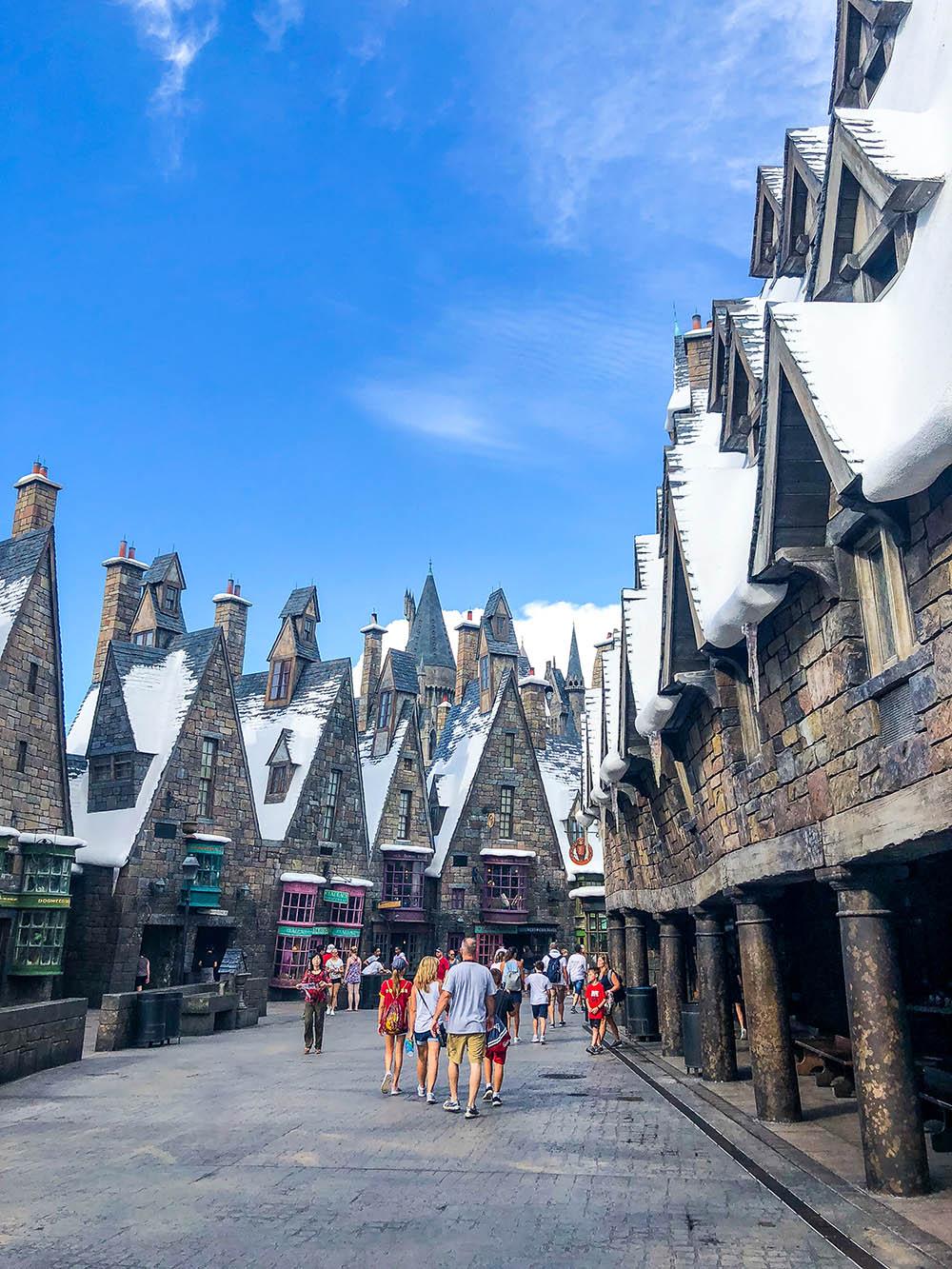 Harry Potter and the Forbidden Journey: This ride inside of Hogwarts Castle is an interactive ride that will bring you on a journey through Hogwarts School of Witchcraft and Wizardry and on a forbidden journey as you ride along on your very own broomstick with your favorite characters. The line for this ride can get crazy. I recommend going straight here first thing in the morning. Your wait will only be the time it takes you to walk to the ride entrance.

Flight of the Hippogriff: Don’t blink, this brief ride lasts approximately 1 minute and 6 seconds. I recommend doing this ride first thing in the morning right after Harry Potter and the Forbidden Journey. Be sure to spot Hagrid’s cottage and Buckbeak’s nest while you’re in line.

This quick train ride will take you on a journey from Hogsmeade to King’s Cross Station, London, where you’ll make your way through Platform 9 3/4, into London, and through the brick wall to Diagon Alley. You’ll ride in your very own carriage car with several others. The cars look just like the movie. I don’t want to give away too much, but it’s worth a ride! 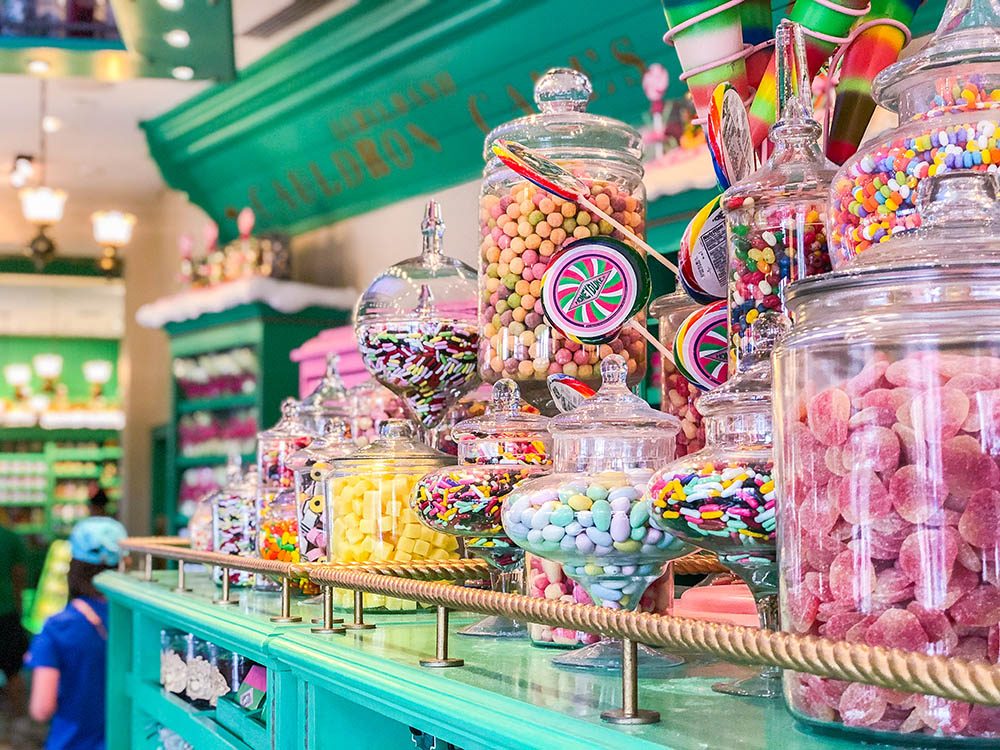 The best part of Hogsmeade, for me at least, is all the adorable shops! Not necessarily what’s IN the shops, but just the detail that has been put into each shop. In Hogsmeade you will find:

I’ll be honest, after my experience at Disneyland Paris, I was slightly worried about starving to death while at the Wizarding World of Harry Potter. I am not generally a fan of overpriced theme park food, but the food here was actually incredible and consisted of a legitimately British menu with items like Fish & Chips, Full English Breakfast, Bangers & Mash, Meat pies, Pasties, and Sticky Toffee Pudding. It was such a happy surprise for me and I wish I could have gone back an extra day just to try all the menu items.

The portions are large. The two of us split the full English Breakfast which consists of eggs, bacon, sausage, blood pudding, beans, tomatoes, mushrooms and a croissant. We couldn’t even finish it. We also ordered pumpkin juice which is my new favorite thing.  SO GOOD (I actually liked it better than butterbeer)! 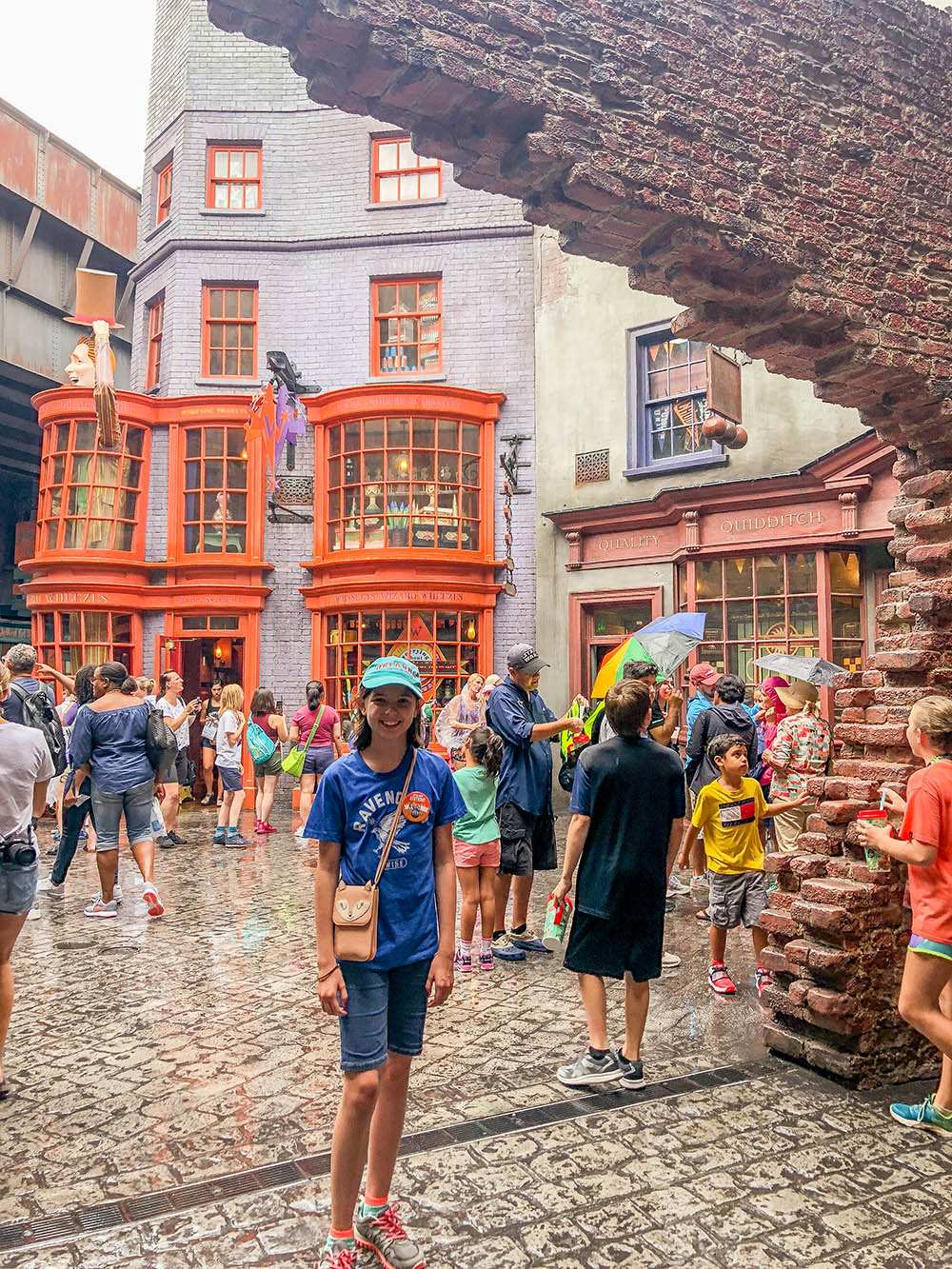 Around noon, I recommend heading to Diagon Alley. Take the Hogwarts Express, pass through Platform 9 3/4 and into King’s Cross Station. As you exit the station, you will find yourself in “London,” which is super adorable! Make your way through the brick wall that opens up to Diagon Alley. As adorable and well-done as Hogsmeade is, Diagon Alley is over the top perfection with the detail. You’ll be greeted by tall crooked buildings, and a dragon towering over the palatial Gringott’s Bank!

I recommend going to Diagon Alley during the hotter part of the day as it feels more shaded, and you can escape to “Knockturn Alley” and into near-darkness and cool bliss!

Harry Potter and the Escape from Gringotts: This is the only ride we waited in a long line for. At the busiest time of day, the wait was 45 minutes. We went a second time and did the single rider line. It was about 30 minutes. It was well worth the wait though as this was our favorite ride of the day! It incorporates all the interactive parts of the Hogwarts ride, but the movements of this one are faster and more exciting. It’s such a long wait because it’s the only ride in Diagon Alley.

The shops at Diagon Alley are so well done! They are whimsical and spooky and totally magically make you feel like you’ve been transported into another world. Pay attention to all the little details and spend a good few hours wandering the crooked streets.

There are plenty of great food and treats in Diagon Alley, and don’t forget the Butterbeer!

Once you’re finished wandering Diagon Alley, hop back on the Hogwarts Express and head back to Hogsmeade. Wander the town some more then settle yourself on the bridge to Jurrasic Park to watch the light show on Hogwarts Castle.

Hopefully, this guide to the Wizarding World of Harry Potter was helpful to you. There are tons of other rides in both Islands of Adventure and Universal Studios, but we only stuck to Hogsmeade and Diagon Alley. Beyond the rides, shops, and food, there are so many beautiful little details all around both parks. I hope you spend time just wandering!

Don’t forget to book your flight and car through Expedia and then book your discounted hotel through the Expedia Add-On Advantage. Check out even more Universal Studios tips.

I was selected for this opportunity as a member of CLEVER and the content and opinions expressed here are all my own.